This post is part of an ongoing series. Part I. Part III.

Dean Dettloff: Wow. I feel as though you’re already performing this kind of intimacy-therapy on me in this interview alone! The themes of renewal you trace are neither bound to psychological experience nor public consciousness, though they deal with both. You clearly have a heart for interpersonal relationships and societal healing, which seems to bleed into your philosophy of education and a desire for these kinds of ideas to reach a public audience instead of staying within the academy. Would you discuss the way these sensibilities have shaped your role as an educator, both in the academy and outside of it?

Edward F. Mooney: “Intimacy-therapy” captures something about teaching and learning. Unfortunately, the ideal gets lost in the bustle about stiff “learning objectives,” about generating knowledge for the social-industrial-military complex—the specialized research university as a knowledge-generating machine. In my view (I’m in a decided minority), the best education is paternal, avuncular, maternal, fraternal, “sisterly” — where (Platonic) “care of the soul” is front and center. You and I in this blog can discover (and rediscover) the truths of “intimacy-therapy” in the company of other mentors: Kierkegaard, Berdyaev, Nishitani, and countless others you feature for us.

You know what? The words “intimacy-therapy” should start us in a direction, and then give way to examples. Here’s one.

Just this morning I received an email from a student in an on-line class I teach (I ask everyone to send me emails regularly as they read through various assigned texts). I had assigned Henry Bugbee’s The Inward Morning: Philosophical Explorations in Journal Form for an introductory class called “Religion, Meaning, and Knowledge.” I quote my student at length:

Reading The Inward Morning has been one of the most profound experiences in my life… Philosophy is a step into the confessional rather than a dispassionate look at external subjects… There is no more direct a path to the evidence as to how the exposition of my personal philosophy affects those around me than to put it out there and await the reaction.

I was most struck by the idea that wilderness can be viewed not as literal but as a construct…a place out in the world or internally where to experience true recognition one must be open to the most basic examination. Being open to what at once seems inconsequential but on second viewing . . . —the tiny detail explains the whole.

I want to write [in the upcoming writing assignment] about the unseen hand that guides us to places that were previously unimagined. Bugbee alluded to this in his writing about being on the boat during the war. How he had come to be in that place through a set of unseen actions. How even the most mundane, which at first seems beneath notice, can nonetheless be fundamental to the journey of self-discovery.

Ultimately, this trek through the wilderness is about sensory awareness. Moving outside the sheltered world to look for, even anticipate, the unexpected. Every moment is one in which a new reality can be born. Living life in this manner requires a leap of faith, a certain bravery and an openness. What is really happening in the world around me and what does that say about me? 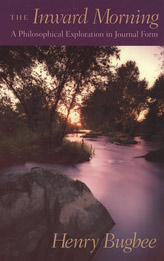 Well, what more could one hope for as a teacher? This is a model, Dean, of intimacy-exchange between text and reader, and then student and teacher. I shared the moment this student shapes through including it a mass e-mail to the rest of the class.

I don’t want to idealize the academy and departments in humanities. By and large I think they’ve abandoned the allure of such learning-teaching exchange—or abandoned giving it much publicity or reinforcement. I don’t want to minimize the importance of technical training and skill-acquisition of the sort physics and economics can provide, either—where intimate communication takes more truncated forms. But the humanities ought to have care of our souls, so the loss of an articulate expression of this in that section of the university is especially unsettling. I think a certain ideal has been abandoned. I’d hesitate to share my enthusiasm about this ideal of intimacy with my colleagues, say in a department meeting where the dean has put pedagogic practice in the spotlight.  This is what I could expect:

“Professor Mooney, what are you saying! That you throw a book out to a class and wait to see what happens? No lectures, no tests on information acquired, no honing of necessary skills? We pay you for encouraging free-form emotional response ?”

I hope I’d say, Yes.  Yes, you pay me for this because the best teaching encourages free emotional-cognitive response. Of course in other contexts I’d lecture on backgrounds to this or that text or writer or movement, and comment on modes of analysis. But I’d want all that to be propaedeutic to the deeper sort of learning expressed in the email I quoted at length.

“But what about all the students who aren’t as sensitive, articulate, and smart as this one whose email you quote?”

Well, you have a point. But I haven’t utterly forgotten “the others,” those outside the special loop that emerges linking this exceptional student, his teacher, his assigned text. After absorbing the impressive email that I quoted, I realized that others in the class could learn from it, and from the response that I mustered to it, and passed back to him. I shared this student’s email (name removed) through mass-mailing, and added this preface from me:

From time to time, a book really works into your soul, reminding you that you have one. Encountering THE INWARD MORNING was like that years ago—decades ago—for me. And from time to time, as I meet a class and pass on the books that have shaped my sense of things in the deepest ways, I catch sight of at least some in class having the books work an excitement, intimacy, and sorrow into their souls; thus the books are reminding them (and reminding me) that they have souls.

The class learned something “factual” about the book, and they were alerted to themes in it that they might have missed. But more important, they’ll get the visceral feel, I hope, of a fellow student being deeply moved by a text (or parts of it). And they’ll see (I hope) that they shouldn’t be ashamed of being deeply moved by texts. They might see why their professor, somewhat eccentrically, believes that such “intimate” experiences are most valuable.  They may even come to believe it themselves, and try to reciprocate.

There’s another strand in your question, Dean. You ask about the reach of “education-as-intimacy-therapy” outside the University or College. I’m writing from Israel, now, and I have a dear friend, also a Kierkegaard scholar, who gives what they call here “Public Lectures.” These lectures are not sponsored by any academic institution but presented by the sort of management agency that in the US would organize rock-music tours. People buy tickets for a series on all sorts of subjects: “Love,” “Power,” “Ayn Rand,” “Hannah Arendt,” “Kierkegaard,” “Spinoza,” “Desire,” a new movie-release. It’s a kind of night school without assignments, tests, attendance checks, or degrees. So there is a way that the sort of intimate teaching-learning I value can move outside the academy. But culturally—regrettably—it doesn’t seem to be part of “The American Way.”

You have yet another part to your question that’s more difficult to answer. You ask me to “discuss the way these sensibilities have shaped your role as an educator, both in the academy and outside of it?” What makes it difficult is that it assumes I have a grasp of my sensibilities, a grasp of what underlies my love of Mozart or canoeing or Thoreau. But I want to say that I just am certain sensibilities whose provenance is dark or shaded, and whose agency now, in the life I articulate, is also dark or dappled at best.

At some point, I found myself up to my neck in writing and speaking in a voice saturated with certain interests or ideals, vulnerabilities and desires—sensibilities. I can tell you how I happened to encounter Thoreau or Dostoevsky, but I’d be hard pressed to say what in my background prepared me for these encounters.  It would be hard to say, in detail, how that sensibility flows specifically into other forms of life I find myself in. They’re just flesh and blood at this point. I’d have to write a Proust-like autobiography full of rich minutia to trace them out; or write a hundred stories of possible sensibilities, as Kierkegaard did. Once those ideals and desires are my flesh and voice, they are just me, and inescapably shape the part I play in academic and family and musical life—willy-nilly. That’s vague, but maybe it sets some bells ringing. 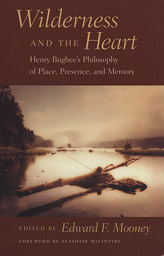 Reblogged this on Mists on the Rivers.